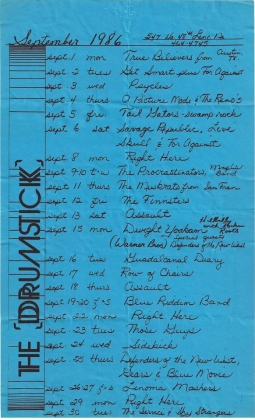 Guadalcanal Diary played to a pretty much empty house. My friend, Jim was taking journalism at UNL. We’d frequent the club and he’d write reviews for the rag. (Daily Nebraskan) Don’t know if any ever got published, but sure had some good times talking with the bands.

Someone in the band mentioned it was their first show in Nebraska. I think they had some book about various states’ fun facts and mentioned that the TV dinner was invented in Omaha. Why I remember that is beyond me. Anyway, they played about everything off the “Walking in the Shadow of the Big Man” LP and tore it up.