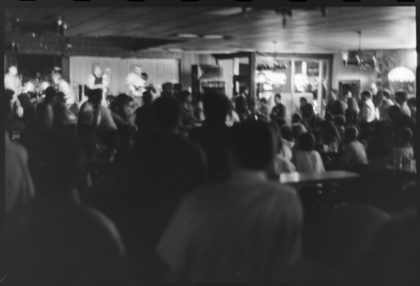 I have two memories, one about a band and one about the club.
I know that many stories have been told about the night X played. I was literally right behind the guy who was flicking ice or his drink at Exene, who was the lead singer and the then wife of the bassist, John Doe. This was all occurring mid-song. John Doe kept shaking his head as if to say, “Don’t do that.” The guy right in front of me persisted, and John Doe jumped off stage and started wrestling the guy right at my feet. After John Doe returned to stage, he announced that he’d lost his bracelet when he jumped off stage, and the crowd then began to search the floor for him. I believe the guy who was flicking ice or water at Exene was escorted out of the Drumstick. A good fried, who was in front of the stage on the other side where Billy Zoom was playing, told me that Billy didn’t move when John Doe leapt off stage. All he did was say, “Uh oh.” Apart from all that, it was an incredible night of music, although extremely loud.

The other memory I have relates to how hot the Drumstick could get on summer night. One night, myself and two of my friends got into a discussion about who sweated the most that night. We decided the only way to know was to go outside at closing, take off our t-shirts, and wring them out. Whoever produced the biggest puddle on the pavement would be declared the winner. I can’t vouch for the scientific authenticity of this test or whether we controlled all the variables. I do recall that all of us produced pretty good puddles and that I sadly lost.
I would encourage people to see the movie. It’s really good, but bittersweet, movie. It brings back lots of great memories. I was so jazzed up after seeing the movie last Friday that I had a hard time getting to sleep, reliving all the wonderful times in my mind. My wife attended the movie too. While she does not share my taste in music and thought the Drumstick would have been too loud and too hot for her, she also liked the movie, finding it very sweet. Well done! 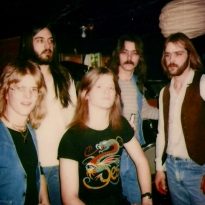 Playing the Drumstick!!
Scroll to top