One of the most memorable shows I attended at the Drumstick was when Husker Du played on May 27th, 1982. It was on a weeknight and it stayed light outside for the whole show. After The Untouchables opened, most of the people left. Only a handful of people stayed (including most of the members of the DK’ed Willies and The Click) for Husker Du’s blistering set. Bob Mould always performed in those days with his eyes rolled into the back of his head as though he were possessed. When they started, those of us left began dancing in a frenzy. Sara Kovanda of the Click invented a couple new dances that night—The Chair Dance where we piled all the heavy empty wooden chairs onto the middle of the dance floor while we all danced in a circle around them. The other dance was called “The Crab dance” where we got on all fours with our arms behind our heads and crawled around the dance floor like we were sea crabs. Tim had promised the band a $150 guarantee, but obviously not enough people showed up for him to make a profit so he tried to talk them down. He told Bob, “We gave you free beer and it costs a lot of electricity to run a club, and you guys were terrible!” Bob finally had to threaten to smash one of the front windows to get paid. After the show the band hung out with us in the parking lot talking about their tour and gave us all buttons and stickers. I have talked to Bob Mould about that night several times since then and he has never forgotten it! 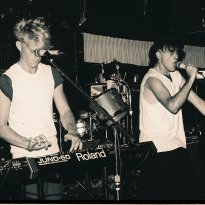 Crap Detectors – sick at the stick
Scroll to top