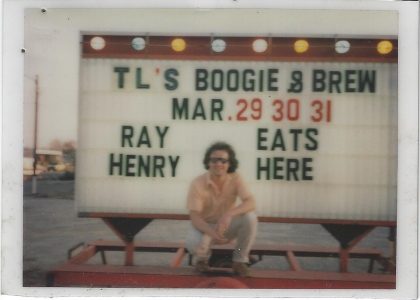 We were a 3-man band called “The Surf Penguins”. Really just a “basement” band of college guys in 1984. We were friends (and fans) of “The Finnsters” who played the Drumstick a few times back in the day. We opened for them at a small UNL campus event and they liked our sound and asked us to open for them at The Drumstick for their next booking. For us, this was our first BIG gig, even though we only had about 6 cover songs to play. We opened that night to a huge crowd and had an absolute blast. Afterward, one of the owners (?) took us aside and asked us if we wanted to book a night of our own. Knowing that we couldn’t play more than half of one set at most, we sheepishly told him we were a long way from being the “feature” act and graciously declined for now. About 1 week later, one of our friends came up to us and told us to drive by the Drumstsick to look at the marquee in the parking lot. Sure enough, it read “This Saturday – The Surf Penguins!”. Whoa! We had to go inside and tell someone that there was a misunderstanding. We couldn’t book it! Man, what I would give to have a picture of that. 38 years later, me and the bass player are still gigging all over Omaha and Lincoln area with our band “The Radio Eclectic”. We would give anything to see that on the marquee just off of O street in Lincoln at our old favorite chicken joint. Great memories!