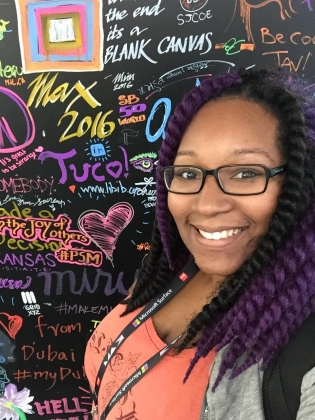 We are excited to announce that Sharonda Harris Marshall has joined our documentary team as Associate Producer. She is focusing on the creation of a rough edit of already-shot footage for the documentary.

Sharonda Harris-Marshall (IMDb: https://www.imdb.com/name/nm5074511/?ref_=nv_sr_1) is a Southern-bred independent filmmaker, photographer, and artist. A native of Mobile, Alabama, she is artistically inspired by the colorful, joie de vivre lifestyle and history of the Gulf Coast.

Sharonda graduated in 2008 from the University of Southern California’s School of Cinematic Arts. A juried fine artist working in digital media, photography, and video, Sharonda’s more experimental video work has been displayed publicly in exhibits such as “Projections on Lake” in Pasadena and at the Lower Dauphin District artwalk in Mobile.

Soon after USC, she was hired as a script reader for a boutique production company. In 2010, with her now-husband Joe, Sharonda started Lagniappe Cinemas, an independent production and photography company. In 2015, she received a Masters at Spring Hill College, where she directed and produced the university’s first graduate-level student film. Later in 2015, Sharonda and Joe relocated to Omaha, Nebraska.

Sharonda has worked on several indie feature-length and film productions and is actively producing several projects, including Hail to the Queens, a New Orleans-based documentary, partially financed by CreateLouisiana and ITVS. She also produces independent music videos, one of which won the SouthSounds Music Video category of the South Alabama Film Festival in 2014.

Sharonda currently teaches photography and digital media at Southeast Community College. She is currently serving a 3-year term on the board for the Nebraska Film Association. She is also a member of Professional Photographers of America, Nebraska Independent Film Projects, the USC Trojan Entertainment Network, and the Mobile Arts Council. She writes about diversity, art, and media on Medium.

Help me welcome this lovely, talented, passionate women to the project!