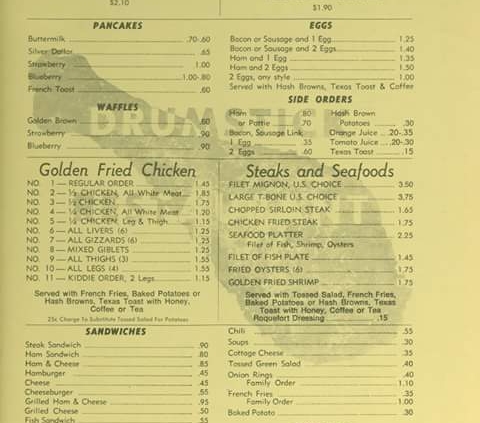 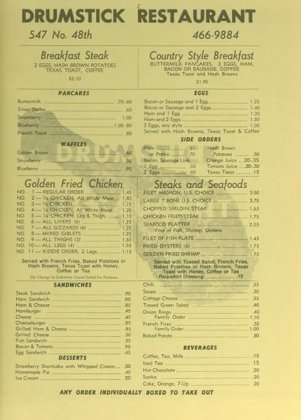 The Drumstick Restaurant was a family owned and operated restaurant in Lincoln, NE. It was located at 547 North 48th St.  It was already in business for some time before the Lohmeier family took it over.  The building originally housed the restaurant on the north half and a laundromat on the south half.  It was open 6am to 10pm at first serving Country Style Breakfasts with homemade batter pancakes, Hamburgers and French Fries, Steaks and Seafood.  But it’s specialty was Fried Chicken.  (This was before a certain Fried Chicken franchise from Kentucky started making its way across the nation.)  It was hand battered, deep fat fried and served with your choice of potatoes and a slice of freshly grilled Texas Toast with honey.  It was De-frickin-licious.  Utility workers, cowboys, doctors, teachers, grandmas and grandpas, young families all ate there and the people who ate there regularly became part of the family.  The Drumstick was one of the first places in Lincoln to stay open all night.  You can imagine how popular that was!  Eventually, the restaurant expanded and took over the entire building.  At night scores of people, (maybe hundreds?) would come in for a late night bite to eat and rarely did anyone leave with anything less than a smile on their face.

New Year’s Eve at the Drumstick
Scroll to top