I worked behind the big horseshoe bar during the very early days of the Drumstick booking bands. The holidays were especially wild. I remember the first New Year’s Eve party. It was a busy, wild night. People came with hats and streamers. We planned to pour some Andre at midnight. One fellow was really getting out of hand at a table of four near the front. Now, the Drumstick was an all night restaurant for years before we started booking bands. So we knew late night people acted up. I don’t remember what this particular guy was doing, but it had to be BAD for him to be on Tim’s radar. I watched as Tim told the guy he had to go. Then the guy started walking out with Tim following. I watched and realized someone else needed to be leading the parade. Our entry way had glass everywhere. I took off for the front door but couldn’t get through the crowd fast enough. You can guess what happened. As soon as the guy got to the door he hauled off and put his fist through it. Mother of God what a mess! Glass everywhere, the guy was bleeding. It was pandemonium. I think we wrapped up his hand in one of our bar towels and his friends put him in the car and they left. Someone got some plywood, patched the door, and the band played on…! Never a dull moment at a Drumstick New Year’s Eve.

Want to join the discussion?
Feel free to contribute! 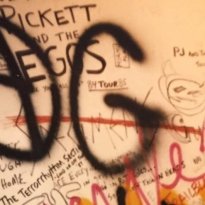